I have these little shoutings fairly regularly these days--because I live in England, the home of mental health stigma.


From the Corpus of Global Web-Based English (GloWBE):

It doesn't matter which preposition you use, if it's a stigma and there's mental health nearby, it's probably British: 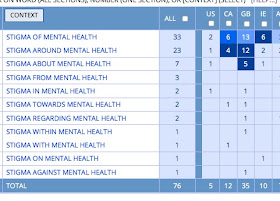 Yes, yes, some of those mental healths will have nouns after them like problems or professionals, but in BrE, most of them don't. For instance, for the 12 British stigma around mental health examples, only two follow up with problems or issues. For the others, it is just mental health that carries the stigma:

I'm being a bit facetious here, but the phrasing does go with the stereotype of the British stiff upper lip. A stigma about admitting to any mental state at all...

Why? A clue is in the number of nouns that follow mental health. The green parts in these tables are the phrases that are statistically much more American (left) or much more British (right): 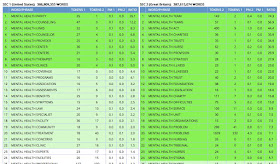 Many of the BrE ones have to do with how the National Health Service is structured, but also you can see here ways of not saying mental illness: mental health problem(s), mental health difficulties, and even mental health illness(es). AmE has some odd ones (from a pedantic point of view too): mental health symptoms (do we ever talk about symptoms of physical health? No. Illnesses have symptoms, not health) and mental health benefits (if the meaning of benefits here is the same as in disability benefits, then it's a benefit for not being healthy).  (Note stigma shows up again in the BrE list.)