Some years ago a survey went (a)round from the University of Ghent on English vocabulary knowledge. I recall doing the survey and I believe I shared it on social media. Perhaps you did it too. Last week I read the published results: Word prevalence norms for 62,000 English lemmas by Marc Brysbaert and colleagues.

The point of the research was to establish how well known various words are in order to help psychologists (etc.) choose words for experiments. I was pleased to see that it included a table showing words that differed most for AmE and BrE speakers. So, my plan is to write two blog posts where I go through the lists of unevenly known words and see what I can say about them (or what I have already said about them). I'm starting with the words that were much more familiar to Americans and I'll put them into categories, rather than going down the list as published.

Here's the (half) table. (Sorry it's not very clear. All the words will be mentioned below.) The unfortunate headings 'Pus' and 'Puk' mean 'prevalence for US respondents' and 'prevalence for UK respondents'. These are not the prevalence scores that one can find in the data files from the paper (which are z-scores with positive and negative values), though, so I think they are just percentages—i.e. 90% of US respondents knew manicotti, but only 16% of UK ones did. The main point about them is that the scores are much higher for American respondents than British ones. 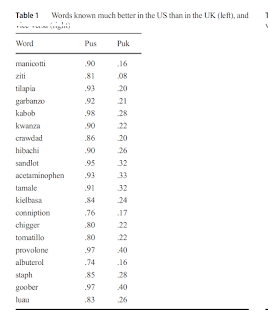 Many of these words are relatively unknown in the UK because they refer to things that are not common in the UK. So, less linguistic difference than cultural difference. Many reflect the US's ethnic diversity. 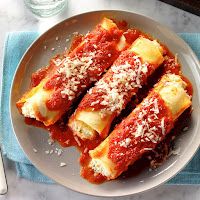 The first two are pasta-related. Manicotti are a kind of large tube pasta, which are stuffed, usually with ricotta, to make the dish pictured to the right. The name is used both for the empty pasta and for the dish. It comes from the Italian for 'little sleeves', but is, according to Wikipedia, "an Italian-American dish". BrE speakers are more likely to know the very similar pasta/dish canneloni, which is also found in the US and Italy. The difference? "Manicotti tubes are ridged, larger and slightly thicker. Cannelloni tubes are smooth, a touch smaller and slightly thinner."*
Ziti is a smaller tubular pasta. Size-wise it is between penne (popular in both countries) and rigatoni. Rigatoni is what my family traditionally had for Christmas Eve dinner, and I usually have to explain that word to BrE speakers as well. (The study confirms that Americans are much more likely to know rigatoni.)  Wikipedia notes that "Ziti in the US is most commonly associated with the Italian-American dish of baked ziti. In Sicily it is traditionally served at a wedding feast." For more on pasta more generally, click through to this old post.
Provolone is an Italian cheese that you can get in the UK, but you just don't see as much as in the US. I like it on hot pastrami sandwiches, but it's usually in Italian dishes. Whether you pronounce the e at the end (when using the word in English) is a matter of personal preference—or possibly regional affiliation.

Tilapia is a fresh-water fish that is apparently easy to farm. Its popularity in the US is fairly recent—I only learned it on a trip back to there maybe 15 years ago. Wikipedia says: "Tilapia is the fourth-most consumed fish in the United States dating back to 2002". It's originally from Africa, and the name is a Latini{s/z}ation of a Setswana word for 'fish'. Apparently you can get tilapia in the UK, but it's just not as common. My guess is that an island nation has less need of fresh-water fishes to eat.
Crawdad is a synonym for crayfish (or crawfish), which are abundant and popular as a food in some parts of the US. The word crayfish is used in both UK and US, and crawfish will have come over from the UK. The OED's etymology is helpful:

So, the craw- came from the UK and later was mostly forgotten there. The -dad seems to have been added in the US as a "fanciful" variation, according to Oxford. Their example sentence includes more synonyms:

‘Whether you know them as mudbugs, ditch bugs, river lobsters, crawlybottoms, crawdads, or crawfish, anyone who has spent time in streams is familiar with crayfish.’ 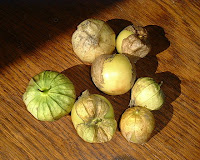 Tomatillos are a member of the physalis family that look kind of like green tomatoes with husks. (Wikipedia gives Mexican husk tomato as an alternative name. The GloWBE corpus only has that one in South Asian countries.) You don't see these much in UK.  For the type of physalis you frequently see in the UK, here are some old tweets of mine.
A tamale consists of a leaf wrapped around a filling—often a corn husk around a maize dough called masa.

Other foods, other cuisines

Kabob is simply a different spelling from what BrE speakers are used to. In BrE it's usually kebab. Since it comes from Arabic (and other languages that got it from Arabic), it's not surprising that the spelling varies—that happens easily when different people are moving a word from one alphabet to another. The cultural place of this food is very different, though. Americans tend to think of shish kabobs—little pieces of food (especially meat) on a stick, typically cooked over fire. In the UK, one often thinks of doner kebabs, which AmE speakers might call gyros, getting the idea from Greek rather than Turkish. That's the compacted meat cooked on a big spit, then sliced off for putting in a pit(t)a bread or similar. In the UK, that kind of kebab is stereotypically found at the end of a night of binge drinking.
(Late addition: here's a corpus view. Note that K-Bob is not a spelling of this food. It's a prolific commenter's handle on a political website. Kubab and Kibib are names of other things as well.) 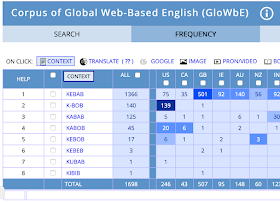 In AmE hibachi is usually a tabletop (AmE) grill/(BrE) barbecue or a kind of iron hot plate used in Japanese restaurants. The word comes from Japanese, but has shifted in meaning. Wikipedia can tell you more.
Kielbasa means 'sausage' in Polish, but in AmE it refers to a specific type of sausage, which Wikipedia tells me "closely resembles the Wiejska sausage". You can find the word kielbasa in the UK in Polish shops, but it remains to be seen how many of these will survive Brexit.
Goober (or goober pea) is a regional (mostly southern) word for 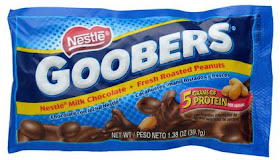 the peanut. It's came into English from a Bantu language (perhaps Kikongo or Kimbundu), brought to the Americas by enslaved Africans. Americans who don't use this as a word for peanuts will still know it as a brand name for chocolate-covered peanuts—a mainstay of (AmE) movie theater/(BrE) cinema concession stands.
Goober can also refer to a foolish person—but that might have a different etymology. (Goober Pyle was a kind but simple character on The Andy Griffith Show—which still shows in repeats on US television.)

Two of the items in the list are generic drug names. I've written about acetaminophen (BrE paracetamol) in another post. Albuterol is a bronchodilator (asthma inhaler) known in the UK as Salbutamol, but I'd bet most BrE folk are more familiar with the trade name Ventolin. In the UK, this comes in a blue inhaler, while preventative inhalers' sleeves are mostly brown, so they're often referred to by colo(u)r: take your brown inhaler twice a day and your blue inhaler as needed.
Staph is short for Staphylococcus bacterium. Americans worry about getting staph infections. I'm sure British people do too, but they haven't obsessed about this particular germ enough to it a nickname. (At least, not until MRSA came along. That's is a very severe kind of anti-biotic-resistant staph infection, but Americans talked about staph infections long before that was in the news.) I remember staph being mentioned a lot in relation to gym mats at school. A partner to staph is strep — which (looking at the data file) is also much, much better known in AmE than BrE. Now I see I've written about both of these germs before. So please have a look at the post on infections for more info!
I'll stick chiggers in this category. They're not a disease, but they feel like one. Chiggers are the larvae of a kind of mite. They burrow under the skin and it itches LIKE HELL. They exist in the UK and some people call them chiggers here, but the word comes up a lot less. Where I'm from, you get chigger "bites" from walking around in grass with bare ankles. There is less cause for walking around in grass with bare ankles in the UK, thanks to fewer lawns and colder weather, so I assume that's why people talk about them less. Wikipedia lists other names for them, which I've looked for in the GloWBE corpus. I give the US/UK (in that order) numbers after the names: berry bugs (1/0), harvest mites (1/2), red bugs (4/1), scrub-itch mites (1/0), and aoutas (0/1). Chigger is the most common name for them in both countries, but with 48 hits in AmE and just 7 in BrE.

Kwanzaa is an African-American holiday that takes place between Christmas and New Year. I assume that's what Americans were recogni{s/z}ing in kwanza, rather than the Angolan currency.
A sandlot is a piece of undeveloped land. The word is used especially when such land is used as a playing field, e.g. sandlot baseball.
A luau (or lūʻau) is a traditional Hawaiian party with food and entertainment.

Conniption.  Origin unknown. It means a tantrum, hysterics, a fit of rage, and the like. It's often used in the phrase conniption fit (which means the same thing). Here are a few examples of its use from the Corpus of Contemporary American English:
--------
So that's that! I'll do the words from other side of the table, known by Brits and not by Americans, in the next post. I won't promise it'll be next week. I might take the weekend off for my birthday!
lynneguist
Share