A 2010 blog post from the Prosody Lab at McGill University was pointed in my direction last week, and judging by the reaction when I tweeted it, I'm not the only one who was surprised by the should-be-evident-but-nearly-invisible difference between British and American it reported. The post is by a non-native speaker of English, 'chael' (who I assume is Michael Wagner, the lab director) and it starts (with my added highlighting):


Three weeks ago me and a good friend were standing in front a piece of art by Jon Pylypchuck at the museum of contemporary art in Montréal. The exhibition is still on until January 4th, and I recommend checking it out.

So looking at one of the faces, my friend asked the following question, which to me was very confusing:

“Do you think this is a frown or a moustache?”

Whatever ‘this’ was, it was clearly below the eyes, and also, the facial expression was sad–so how could it be a frown? My understanding of frown was what I later found in Webster’s online dictionary:
1 : an expression of displeasure
2 : a wrinkling of the brow in displeasure or concentration

When I expressed my puzzlement, I learned that frown, in fact, also means the opposite of smile: a downward facing mouth expressing sadness, and that this is in fact the most common/salient meaning of the word, at least to some. 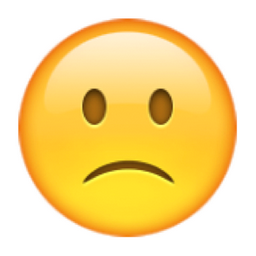 The author goes on to express surprise that in 10 years in North America he hadn't learned that. But I'm 21 years outside North America and a near-lifetime owner of a Merriam-Webster dictionary (what he's cited above), so I'm even more surprised that I hadn't discovered that other people think frowns are on the forehead. For me, a frown has always meant a down-turned mouth. Sure, the rest of the face gets involved, but a frown is what a sad mouth does.

When I tweeted the question "Where is a frown?" British people told me "on the forehead". When I asked the Englishman in my house, he said the same thing. Fourteen years together and only now do I know that he's been frowning much of the time.

And like one of the blog commenters, the Brits I talked with had an epiphany: so that's why Americans say "turn your frown upside down!" to mean 'cheer up!'.

The Brits who responded to my question were mostly northwards of 50, and I do suspect that younger, emoji-centric Britons may have a different perspective, knowing that the above emoji is called 'slightly frowning face' and having been exposed to the upside-down rhyme for more of their lives. (I am tempted to wake up the 8-year-old and ask her.)


I'm fairly surprised that Merriam-Webster does not have the downward-turning mouth definition of frown—the newer meaning. Neither do most of the dictionaries I consulted—only online-only types seem to have it. While the mouth sense is newer, many northwards-of-50 Americans like me just take that meaning for granted. I mean, I'm pretty sure learned it from my mother.

On the Murphy side of my family, we are genetically predisposed to sticking our tongues out in concentration, though I suppose there's some brow-furrowing too. We just call it a furrowed brow rather than a frown. When we're annoyed we might glower.  All of these should be available in British English too—I'm just mentioning them to point out that not having this meaning of frown does not prevent us from talking about the facial expression.

A continuing AmE/BrE divide on this matter is supported by the nominal collocates of frown—fancy linguist-speak for which nouns go near (±3 words in this case) frown in the Corpus of Global Web-Based English. 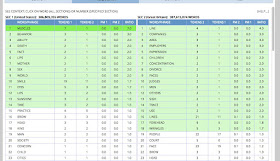 The green-highlighted words are the "most American" (left) and "most British" (right) collocates of frown. There's all sorts of stuff there, but most relevant to us, the American column has lips and smile (also eyes, it must be said) and the British column has concentration and forehead. (Though it must also be said, the actual numbers of these collocates are tiny.)

I recommend having a look at the McGill blog post. They've done a little digging to try to find the earliest instances of frown as a mouth-move, which seem to be from the mid-20th century.

Meanwhile, I can't seem to find an emoji that gives the essence of the BrE frown. Is it persevering face? 😣 Is it pensive face? 😔 There doesn't seem to be a 'concentration' face. Quick! Someone! Alert the Unicode Consortium!

Postscript, 13 Sept 2016:
I have to add a link to Josef Fruehwald's tweet—click on the links to see American Sign Language and British Sign Language translations of English frown. Quite a stark difference!